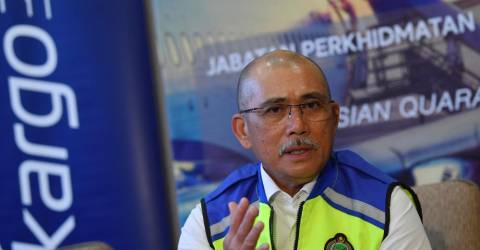 SEPANG: Whole chicken imports rose by 80 per cent in June to 471 metric tons compared to 258 metric tons in May following the abolishment of the approved permits (AP) and the suspension of permit fees that began last month (June).

He said the food importation procedure, simplified by the Malaysian Quarantine and Inspection Services (MAQIS), had sped up the process of bringing in whole chickens.

“Chicken supply in our country is stable,” he told the media after checking out the import and export operations of agricultural and livestock products at the Kuala Lumpur International Airport (KLIA) cargo complex here today.

Prime Minister Datuk Seri Ismail Sabri Yaakob announced the cessation of chicken exports, a total of 3.6 million birds a month, beginning June 1, in addition to the abolishment of chicken APs, followed by the suspension of permit fees for corn, soy, wheat, whole chicken and livestock feed on June 21.

On whether the ceiling price of RM9.40 per kilogramme of chicken in Peninsular Malaysia could be reduced as chicken prices have stablised, Ronald said the price depended on market forces like the input costs of livestock feed.

“Input costs for livestock, vegetables and most food products made in Malaysia are largely dependent on international market prices of fertiliser and pesticides, while for chickens and ruminants, 70 per cent of production costs depend on grain input prices, including imported corn and soy.

“We rear chickens but we don’t plant corn and soy, which are needed for feed. So all of this depends on the international market,” he said.

Ronald said the government, through MAQIS, has also implemented several initiatives to simplify the importation process for foodstuff, including a 24-hour quick entry process at all entry points in the country, that will reduce the cost of logistics involved in import activities.

The initiative has helped 380 companies registered as livestock feed importers to smoothen the import process.

“Till now, a total of 490 grain and livestock feed consignments with a quantity of 173,000 metric tons worth RM483 million has benefited from this quick entry process,” he added.-Bernama