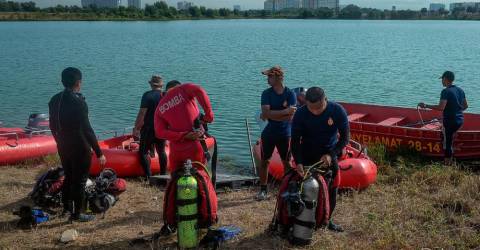 KUALA LUMPUR: A total of 29,103 officers and personnel of the Fire and Rescue Department (JBPM) are all ready with 1,070 assets including five aircraft to be mobilised to face any disasters.

He said the three aircraft are placed in Subang Selangor with one each in Bertam, Penang and Miri in Sarawak.

“The state JBPM should be prepared to receive orders from the Operation Management Centre (PPO) to organise the movement of resources and logistics to the Forward Bases or flood-affected states.

“Apart from that, the human resources and logistics would also be deployed from states which are not affected by floods as instructed by PPO within one hour upon receiving the order,” he told Bernama recently.

Mohamad Hamdan said a freeze on leave would also be carried out in stages involving 80 per cent of officers and personnel.

He said there are 5,496 locations detected as flood-risk areas throughout the country while 186 locations were identified as water surge-risk areas.

Meanwhile, Selangor JBPM director, Norazam Khamis said the state department had listed six management elements to deal with floods in the state, among them, an addition of 50 per cent vehicles comprising 43 units of boats and 64 units of various watercraft.

“Selangor JBPM has also set up an Incident Command System at the state headquarters linked with other zones, apart from identifying flood hotspots in 339 areas in Selangor following the uncertain climate change environment now,’ he said.

The move is important as the Malaysian Armed Forces prepare to set up more field hospitals if needed, including during this monsoon season.

The Defence Ministry is now on alert to assist related agencies and is waiting for instructions from the Central Disaster Management Committee chaired by Prime Minister Datuk Seri Ismail Sabri Yaakob. – Bernama