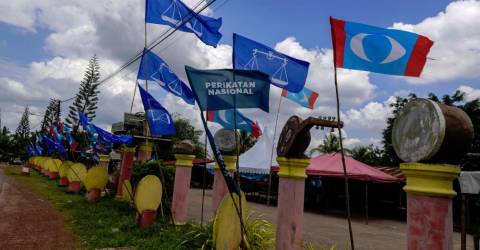 KUALA LUMPUR: Several political coalitions and parties have begun announcing their prospective candidates for parliamentary seats ahead of the nomination day for the 15th General Election (GE15).

The announcement saw some old faces being selected by their parties to contest new seats, while others will defend the ones they won in the GE14.

There are also parties which have yet to unveil their list of candidates including Barisan Nasional (BN), which is expected to do so next week.

According to UMNO vice-president Datuk Seri Mahdzir Khalid, the coalition is in the final stage of concluding the discussion on seat allocation among its component parties.

DAP also decided to allow incumbent assemblymen for Ketari, Tras and Tanah Rata in Pahang to make optimal use of their experience and contest for parliamentary seats in the state.

They are Young Syefura Othman, Chow Yu Hui and Chiong Yoke Kong who will be fielded in Bentong, Raub and Cameron Highlands respectively.

Meanwhile, PKR has announced 10 of its candidates so far, including party president Datuk Seri Anwar Ibrahim who will contest the Tambun seat, while his seat in Port Dickson, Negeri Sembilan will be contested by Menteri Besar Datuk Seri Aminuddin Harun.

The incumbent for Simpang Renggam Dr Maszlee Malik will defend his seat in the GE15.

Without naming the seats to be contested, PKR also announced that the former secretary-general of the Ministry of Agriculture and Agro-based Industry Datuk Zainal Azman Abu Seman, as well as the son of former PAS Spiritual Leader, Nik Omar Nik Abdul Aziz, will be fielded to contest in Perak, while former vice-chancellor of Universiti Sultan Zainal Abidin (UnisZa) Datuk Dr Hassan Basri Awang Mat Dahan, in Pahang.

Amanah, on the other hand, will be fielding Khalid Samad to contest in Titiwangsa and Muhammad Faiz Fadzil in Tampin, Negeri Sembilan, while the party’s Negeri Sembilan vice-chief Datuk Zulkefly Mohamad Omar will contest in Jelebu, and the state’s Wanita chief Norwani Ahmat, in Jempol.

Warisan has also confirmed that it would contest four parliamentary seats in Sabah, namely through Datuk Adnan Puteh in Sipitang and Dr Daud Yusof in Kimanis, while Ahmad Hassan and Isnaraissah Munirah Majilis to defend their seats in Papar and Kota Belud, respectively.

Meanwhile, incumbent MP for Bentong Wong Tack, who had previously contested on the DAP ticket, announced that he would defend the seat as an independent candidate in this general election.

The three of them will be defending their respective seats namely Langkawi, Jerlun and Kubang Pasu in Kedah.

The Election Commission has set the nomination for GE15 on Nov 5, early voting on Nov 15, and polling on Nov 19. – Bernama