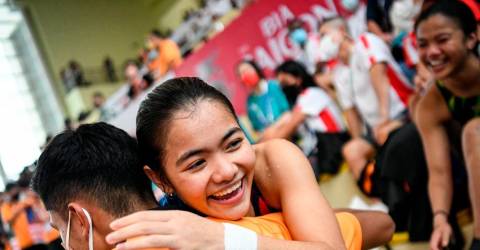 HANOI: National diver Nur Dhabitah Sabri(pix) hopes her achievement in bagging the country’s first gold medal today would motivate other athletes in the Malaysian contingent to go for glory at the 31st SEA Games in Vietnam.

Nur Dhabitah clinched the country’s first gold medal at the biennial Games here after triumphing in the women’s 1-metre (m) springboard individual at the My Dinh Aquatic Centre here.

Speaking to reporters after her event, the 22-year-old admitted that for an athlete to succeed, one would have to make a lot of sacrifices and face various challenges.

“I hope that my contribution today will spur the other athletes to work harder to clinch a gold medal because I know it’s not easy,” said Nur Dhabitah.

It was the fifth SEA Games gold medal for Nur Dhabitah since making her debut in the biennial Games in the 2013 edition in Myanmar.

Commenting on today’s action, Nur Dhabitah, who finished fourth in the 3m springboard individual at the Tokyo Olympics 2020, said she was quite nervous despite being the favourite.

“Like I said, every championship is different and although this is the SEA Games, I treat each competition as a big thing, so that’s why I was a bit nervous.

“I didn’t think about other divers, I focus mostly on myself to improve my performance because my biggest challenge is myself,” she said.

Nur Dhabitah can bag her sixth gold medal when she competes in the 10m platform synchronised with diving queen Datuk Pandelela Rinong Ramg on Wednesday (May 11) at the same venue.

“That event also makes me nervous because it’s been three years since we last competed in the platform event, so I want to prove to myself that I am still capable of doing it,” she said.

The Malaysian contingent are targeting 36 gold medals from the 31st SEA Games, which will officially open on May 12, with Nur Dhabitah given the honour of being Malaysia’s flag bearer.-Bernama