The largest ever haul of Bronze Age items unearthed in London has revealed insight into the beauty regime and lifestyles of Britons 2,900 years ago.

A double-sided razor and a pair of tweezers discovered in London date back to around 900BC and form part of the Havering Hoard.

They were both made from the copper alloy and shows hair removal has been an integral part of British society for millennia.

Other finds revealed to the public for the first time include a bracelet fragment made from finely worked bronze which would have required great skill to forge.

These rare artefacts are set to go on display at the Museum of London Docklands as soon as the museum can reopen in the wake of the coronavirus crisis. 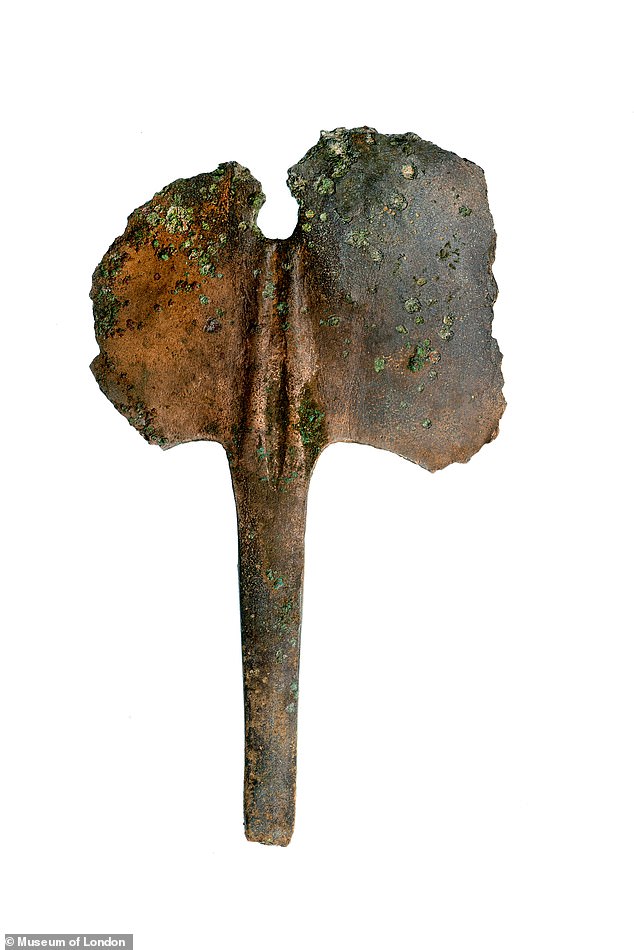 The razor (pictured) and the bracelet are both made from very thin bronze which require a high level of skill to create. It also means that they are fragile 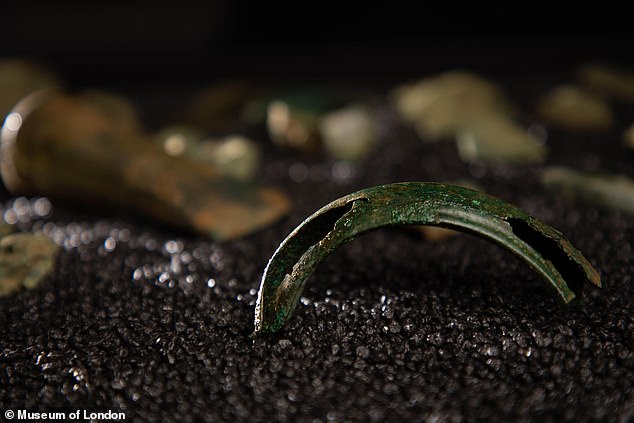 Pictured, a bracelet discovered in the Havering Hoard ahead of the upcoming major exhibition, Havering Hoard: A Bronze Age Mystery, at the Museum of London Docklands. The items were due to be showcase to the public on April 3 but this has been delayed due to the outbreak of COVID-19

The Havering Hoard is London’s largest ever Bronze Age collection of items and includes 453 artefacts.

The discovery of the double-sided razor shows an element of choice in Bronze Age aesthetics.

It implies men could either grow facial hair or be clean-shaven, and suggests a degree of individualism in the ancient culture of the British Isles.

Curator Kate Sumnall, from the Museum of London, told MailOnline: ‘Bronze Age tweezers and razors have been found across Europe and give clues about hair removal suggesting that appearance was important and also tied to identity within the Bronze Age population.

‘Burials with extraordinary preservation have been discovered in Scandinavia, these burials included some clean shaven men.

‘Razors have been included in higher-status burials as well as hoards, so they seem to be prestige objects.’ 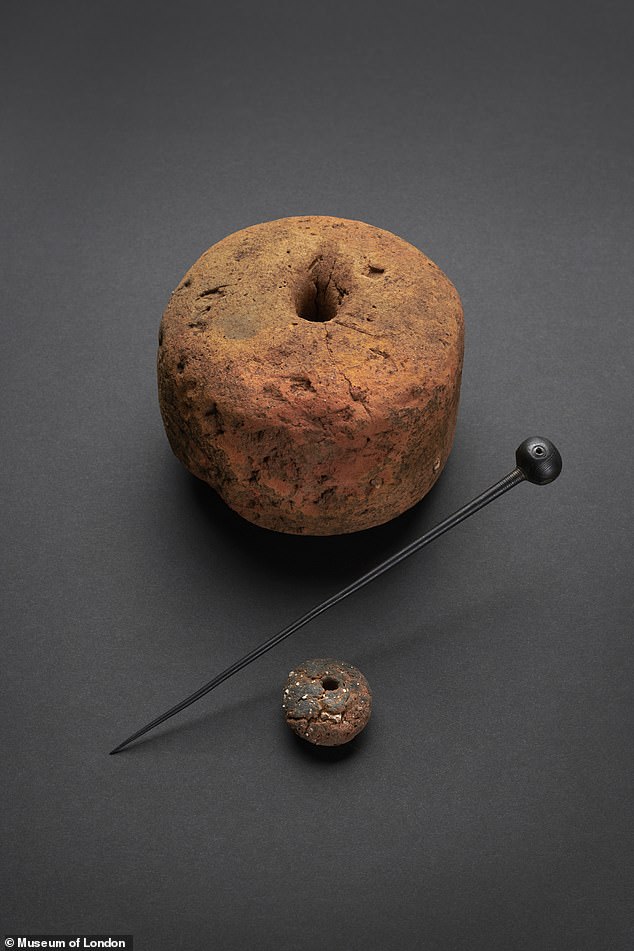 Pictured, a cloak pin decorated with amber and an intact loomweight and spindlewhorl. The ceramic items are very durable due to how they are made and therefore survived in tact. The large pin was found in the Thames, near Strand-on-the-Green, and would have been used for securing a cloak or similar 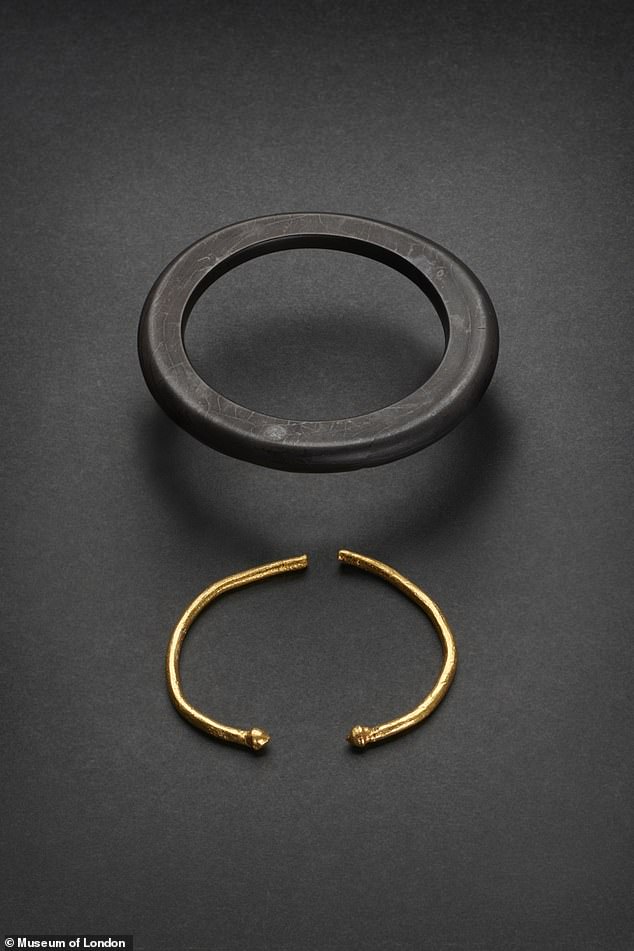 Jewellery was also discovered during the excavations, including a bracelet fragments and a cloak pin decorated with amber unearthed. Pictured, bracelets from the Bronze Age collection at the Museum of London, not part of the Havering hoard. The hoard contained only copper and bronze items, but these are made of jet and gold. It is believed the people living in the Thames valley 3,000 years ago were importing goods via trade

How the Havering Hoard was excavated

The Havering Hoard was buried in four parts.

The first part ‘hoard 1’ was discovered and excavated on site by trained archaeologists.

When hoard 2, 3 and 4 were discovered, the archaeologists decided the excavations would be best performed slowly and in a lab.

This involved removing huge cubes of Earth and transporting them for analysis.

They were then ‘micro-excavated’ in lab conditions by Pieta Greaves of Drakon Heritage and Conservation.

She recorded the location of each object and then carefully cleaned and stabilised a selection of objects.

Jewellery was also discovered during the excavations, including fragments of a bracelet and a cloak pin decorated with amber.

‘The razor and the bracelet are both made from very thin bronze which require a high level of skill to create. It also means that they are fragile,’ says Ms Sumnall.

‘The edges of the razor are missing and the bracelet has needed some stabilisation as some pieces had become detached while it was in the ground.

‘The large pin was found in the Thames, near Strand-on-the-Green, it also dates to the late Bronze Age and would have been used for securing a cloak or similar.’

The razor and the bracelet were not perfectly preserved – a common feature of the Havering Hoard.

Ms Sumnall explains that only one sixth of the objects contained within the entirety of the Hoard were found intact.

‘All the rest were deliberately broken,’ she adds. ‘We don’t know why they were broken, possibly for recycling or for ease of transport, possibly to take them out of everyday use, or possibly as part of a ritual.’

Some of the most well-preserved items include those made of ceramic, such as an intact loomweight and spindlewhorl.

These were made to last and the production of ceramics involves firing at a high temperature, improving their durability. 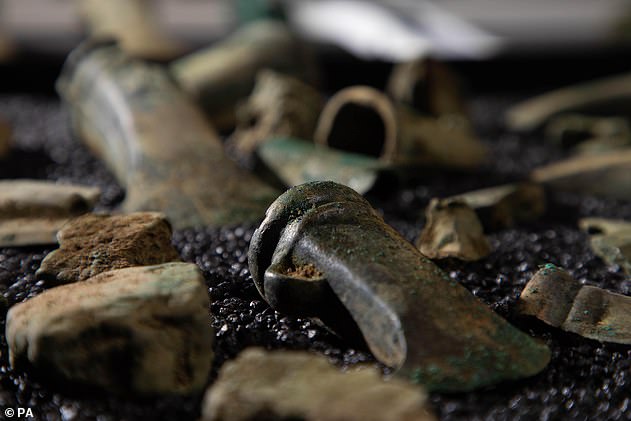 Axe heads discovered in the Havering Hoard are pictured. The treasure trove was filled with various weapons as well as a smattering of personal items 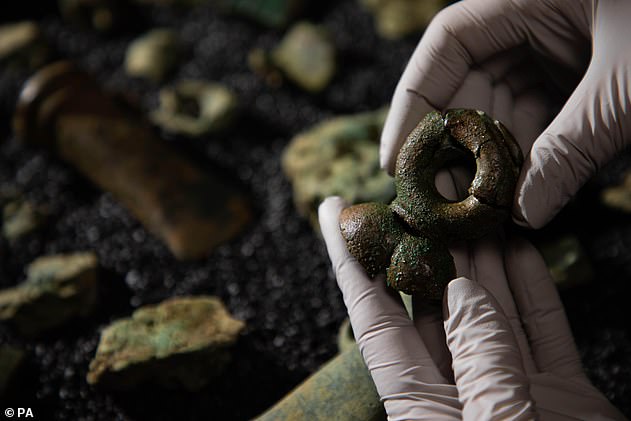 Among the objects revealed are a pair of terret rings (pictured), a rare discovery as these are the first Bronze Age examples of their kind ever to be found in the UK. These objects are believed to have been used to prevent the reins from tangling on horse-drawn carts 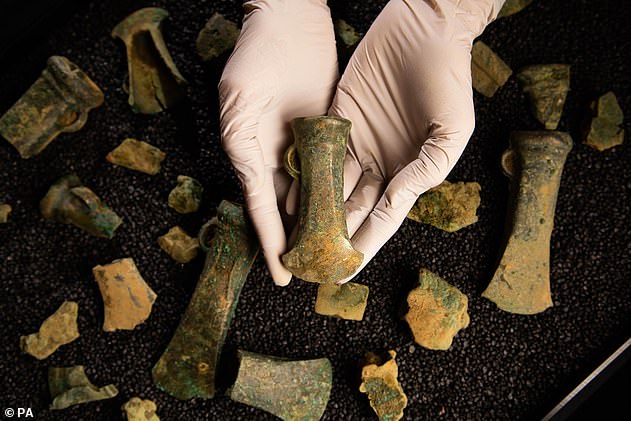 The treasure trove of 453 artefacts dating back nearly 3,000 years includes axe heads, spearheads, fragments of swords, daggers, knives and copper ingots. Items were found by archaeologists in September 2018 and date back to between 800BC and 900BC

‘These objects give an insight into the activities that were taking place on site – the spinning and weaving of wool,’ explains Ms Sumnall.

‘It suggests that sheep were being kept in the local area and it also provides clues as to what the Bronze Age people were wearing, using for blankets or maybe wall hangings or rugs within the roundhouse.

‘The artefacts found on the Havering site combined with objects from our collections build the bigger picture on who the people were that lived in the London area at this time, what they looked like and what was important to them.’

Most of the items in the hoard are axe heads, spearheads, fragments of swords, daggers, knives and copper ingots.

All the items underwent a meticulous preservation process and they were due to be showcased to the public on April 3 but this has been delayed due to the outbreak of COVID-19.

Ms Sumnall, from the Museum of London, told MailOnline that only a tiny percentage of items in the hoard were used for personal grooming or ornamentation.

However, she says the weapons and tools that are common in the hoard were important personal possessions that likely held great meaning to individuals.

Researchers are puzzling over why the hoard was buried in the first place and understand the origin of the treasure trove of Bronze Age artefacts.

‘The artefacts contained within the Havering Hoard give clues about what was important and valued within society at this time, says Ms Sumnall.

‘We cannot know the motivations for the act of creating and burying a hoard but we can study the selection of which objects were chosen to be included and also the condition of the objects.

‘These objects were all made out of bronze and the ingots are copper, this metal was very valuable and could be recycled so to bury large quantities in the ground presents the interesting question of why.

‘The objects themselves are a mixture of tools like axes that would have been a common possession and the higher status or more unusual like the razor or the terret rings (used to guide horse reins on a cart).

‘These give a tantalising glimpse into the everyday tasks that Bronze Age people carried out, such as felling trees to build boats and roundhouses, and also clues about how they travelled around and the animals that they kept.’

WHAT DO WE KNOW ABOUT BRONZE AGE BRITAIN?

It was a time when sophisticated bronze tools, pots and weapons were brought over from continental Europe.

Skulls uncovered from this period are vastly different from Stone Age skulls, which suggests this period of migration brought new ideas and new blood from overseas.

Bronze is made from 10 per cent tin and 90 per cent copper, both of which were in abundance at the time.

Crete appears to be a centre of expansion for the bronze trade in Europe and weapons first came over from the Mycenaeans in southern Russia.

It is widely believed bronze first came to Britain with the Beaker people who lived about 4,500 years ago in the temperate zones of Europe.

They received their name from their distinctive bell-shaped beakers, decorated in horizontal zones by finely toothed stamps.

The decorated pots are almost ubiquitous across Europe, and could have been used as drinking vessels or ceremonious urns.

Believed to be originally from Spain, the Beaker folk soon spread into central and western Europe in their search for metals.

Textile production was also under way at the time and people wore wrap-around skirts, tunics and cloaks. Men were generally clean-shaven and had long hair.

The dead were cremated or buried in small cemeteries near settlements.

This period was followed by the Iron Age which started around 650 BC and finished around 43 AD.