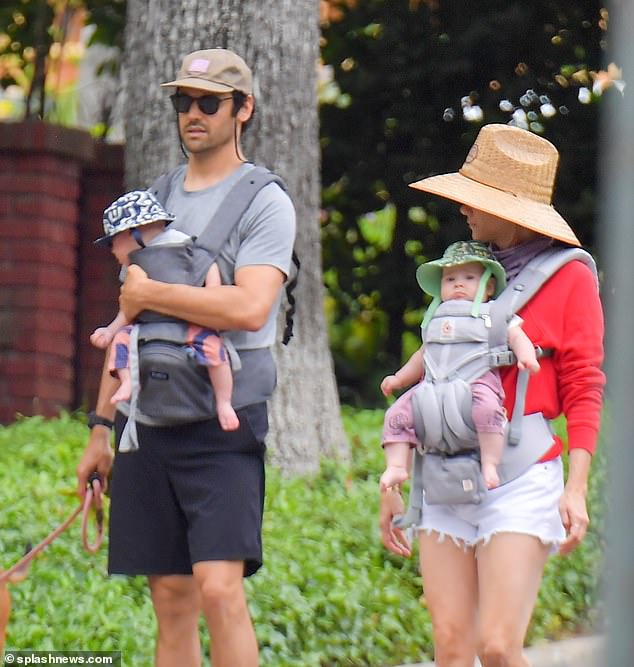 By Kelby Vera For Dailymail.com

The 46-year-old comic and her fiance were seen carrying their adorable babies for the first time on Wednesday.

Wiig ignited rumors she was starting a family when she thanked her own mother for ‘preparing me to be a mom myself’ during a Mother’s Day sketch on SNL last month.

Kristen, Avi and the babies certainly looked like a happy family during their afternoon stroll.

The comedienne and her actor/director/writer love each had a baby strapped to their fronts in Ergo-brand carriers. Their hands very looked full, as the couple also brought their dog on the outing.

Kristen tried to keep a low-profile while wearing a wide-brimmed straw hat that almost completely obscured her face. Avi, meanwhile, wore a baseball hat and sunglasses but opted against a face mask.

After a bit of walking Wiig stopped to dote over one of the babies, seen adjusting their little bucket hat.

Kristen and Avi began dating in 2016. Their romance first made news after they were seen packing on the PDA during a vacation to Kauai, Hawaii and they were engaged sometime last year.

After the ill-fated relationship, Kristen told the British magazine Stella that she wasn’t looking to walk down the aisle again.

‘It’s not something that I would want to do,’ she said. ‘I think women put that pressure on themselves, maybe even more than society does.’

Back in 2015 a then-single Kristen laughed off questions about her family plans during an interview with Entertainment Tonight.

‘I have a daughter who is a dog, and I’ve got some great plants that I’ve had for a long time that I feel like are my children.’