Each year I receive many questions and requests for advice via these pages and yet I’m aware of how few of them actually get addressed every week. I am sorry if you feel neglected but I try, I really do.

I sift and select and do my best to represent the most pressing problems that you send me and yet also try not to repeat myself too often.

But once a year I take the opportunity to catch up on a few of those that slipped through the net and answer a bigger batch than the three that are usually allocated to this page every week.

I do love hearing from you, so please don’t stop sending your questions in – hopefully your turn will come round in time.

What I would say is that questions that are as specific as possible and yet can be applied to as many gardens as possible are the ones most likely to be picked.

Anyway, here is a batch that I hope will have a wide relevance to gardeners all over the country.

Monty Don with his parsnips in his garden. The British gardening expert answered all the readers’ pressing problems 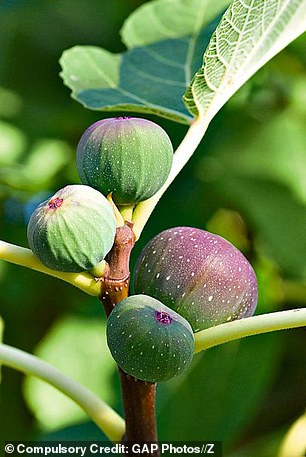 Q: Four years ago I was given a fig plant in a pot. It has grown well and last year started to show signs of bearing fruit. When is the best time to re-pot it, and which type of compost should I use?

A: Figs like good drainage above all, so I suggest a peat-free, bark-based compost with added grit, and – if possible – some garden compost.

Despite needing good drainage they also require plenty of water, so give yours a weekly soak and a liquid seaweed feed every week or two between April and September. The best time to repot it will be just as there are signs of new growth in spring – probably some time in April.

Q: I would like to stop my 12ft-high palm tree – a Trachycarpus fortunei, I think – from growing any taller. Should I simply lop off the top, or is there some other method I can use to limit the height?

A: You cannot really prune T. fortunei to limit its height. Like all palms it can only grow upwards, so take out the top and it stops growing. But this tree grows relatively slowly – no more than a foot a year – and can be stripped of all its dead leaves and the hairy ‘body-wrapping’ to reveal a smooth, slimmer, much more elegant plant.

Also, the more sunlight it gets, the stouter and shorter it tends to be. Shade makes it grow taller and thinner.

Q: I’ve grown two lemon plants from pips. I don’t have a greenhouse, so what should I do with them over winter? 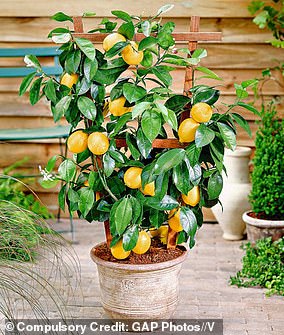 Lemons do not like winter cold much below -3 or -4°C. Stock photo

A: Lemons do not like winter cold much below -3 or -4°C, and hate sitting in cold and wet soil, so some protection is needed.

Ideally they should be kept cool, dry and in quite humid air until the risk of frost has passed, and then brought out into as much sunshine as possible, with regular watering and feed.

A shed or cellar will be fine as long as it has some light and is frost free. A living room will be too dry but a porch might be fine.

Failing that, move them to a sheltered spot, use horticultural fleece to protect them from the worst of the cold, raise them up on chocks so they can drain thoroughly – and do not water them at all over winter if they are outside.

Q: My son has a major problem with horsetail in his garden. Can it be eradicated?

A: I am afraid that horsetail, Equisetum arvense, is one of the most difficult weeds to get rid of. The roots go down as far as 8ft and unless completely removed will reshoot.

However, you can weaken it. The first thing to do is cut it back regularly (it makes an excellent addition to the compost heap). Horsetail likes poor – and poorly drained – soil, so giving it a regular, thick mulch of garden compost and improving the drainage will help too.

HELP! I’VE GOT A PEONY PROBLEM

Q: Everyone comments on my lovely yellow tree peony. What should I do when the flowers die – do I cut it right down? 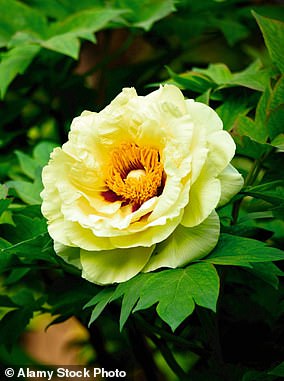 A: This sounds like Paeonia lutea, which I also have in my garden. It is lovely. Tree peonies are woody shrubs that have simpler, generally smaller flowers than their herbaceous cousins and need different treatment.

They do not ‘need’ pruning but if they become over-large or crowded, individual older stems can be cut back hard to the ground and will resprout healthy new shoots.

Resist the temptation, though, to cut back any seemingly dead wood until well into spring, as there is often a bud enclosed within a brown, scaly casing.

Unlike herbaceous peonies, they should be planted fairly deep – with the soil level of the pot about 3 or 4in below ground – and mulched thickly every spring.

Q: Can I grow vegetables in a plot that’s shaded by protected woodland behind my garden?

A: All vegetables need sun to a greater or lesser extent, but some do better in shade than others.

Leafy crops such as lettuce, spinach, rocket and mizuna will not mind shade, especially in summer, as they grow best in cool conditions.

Root crops such as potatoes, beetroot, radishes, carrots and parsnips will be worth growing. All brassicas – such as cabbage, kale, Brussels sprouts and broccoli – will be fine too. Leeks are especially good for shade and of the legumes, broad beans and runner beans will be viable.

But do everything you can to maximise the light and, because the growing season will be shorter in the shade, I suggest using raised beds to help the soil warm up more quickly.

NEW BEES ON THE BLOCK

But don’t be afraid; they won’t sting, as ivy bees are pretty harmless.

The bees, Colletes hederae, were first spotted in Dorset in 2001 and they’re now as far north as Cumbria. 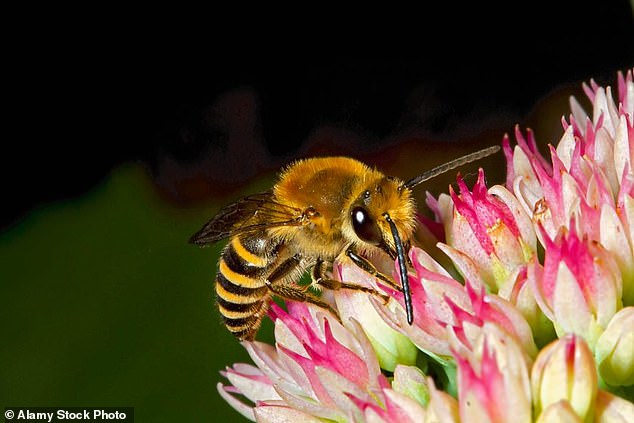 The bees, Colletes hederae (pictured), were first spotted in Dorset in 2001 and they’re now as far north as Cumbria

They nest in individual burrows in loose or sandy soil, or on lawns.

At one site on a sandy cliff in Cornwall, pitted with holes made by burrow excavations, she estimated tens of thousands of nests – which isn’t unusual.

Female ivy bees give off a pheromone that keeps males close to the nesting site until they have mated.

At the start of the season, the males frantically fly back and forth looking for emerging females.

Ivy bees came here from northern Europe and were first identified as a distinct species in 1993.

They are not invasive and pose no threat to native bees.

‘They have velvety coats, their thorax is a gorgeous ginger colour, and their abdomen is striped black and yellowy-orange,’ says Brigit.

‘People are scared when they hear them buzzing, but they’re quite safe.’

Amazingly, each bee finds its way back to its own nest, despite the landslides caused by burrowing neighbours.

After only six weeks of flying about, these beautiful bees die, and the next generation pupates underground until the following autumn.

Brigit will be familiar to viewers of the BBC2 series It’s Not Easy Being Green, which aired between 2006 and 2009 and documented her family’s attempts to live an eco-friendly lifestyle in Cornwall. After it ended, Brigit became fascinated by bee behaviour.

Most people, she says, think of honeybees and bumblebees, but they’re a tiny minority.

And while honeybees and bumblebees are social creatures, the vast majority of our bee species are solitary, only interacting when mating – of around 270 native bee species in Britain, some 250 are solitary.

Given the surge in beekeeping, honeybees are thriving but many native species are in decline due to the increased competition for resources.

Another new arrival in 2001 was the tree bumblebee (Bombus hypnorum), which spread rapidly from the New Forest to as far as Scotland. It nests in holes in trees but likes abandoned bird boxes too.

It thrives on garden plants such as cotoneaster, and loves bell-shaped flowers like bluebells and heathers.

As nests are often at eye level, tree bumblebees are easy to observe.

One of the first solitary bees to emerge in spring is the hairy- footed flower bee (Anthophora plumipes). ‘They have attitude!’ says Brigit. ‘The males zip around comfrey and lungwort, and they’ll chase a bumblebee three times their size off their patch.’

If Brigit has a favourite bee, it’s the red-tailed mason (Osmia bicolor), which nests in empty snail shells. ‘The female lays eggs then seals the shell with chewed-up leaves and gravel or sand,’ she says.

‘Some bees are smaller than a grain of rice; some have long tongues to pollinate wild flowers. But every species has a different role – it’s not one bee fits all.’