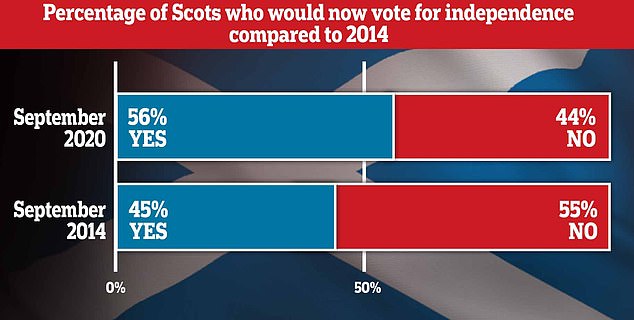 Scottish voters’ ‘loathing’ for Boris Johnson is behind surge in support for independence: PM is disliked even more than Theresa May or David Cameron, pollsters reveal

By Katie Weston For Mailonline

Scottish voters’ ‘loathing’ for Boris Johnson has seen a surge in support for independence as the Prime Minister is disliked even more than Theresa May or David Cameron, pollsters have revealed.

JL Partners found in a poll conducted last month that 56 per cent would now vote for Scotland to be an independent nation, while 44 per cent would vote against.

It is almost a mirror opposite of the Scottish independence referendum results in 2014, for which 45 per cent voted in support and 55 per cent in opposition.

The study of 1,016 people also discovered that, under reasons for supporting independence, 79 per cent of swing voters agreed with the statement that ‘Boris Johnson is not the leader I want to have for my country’. 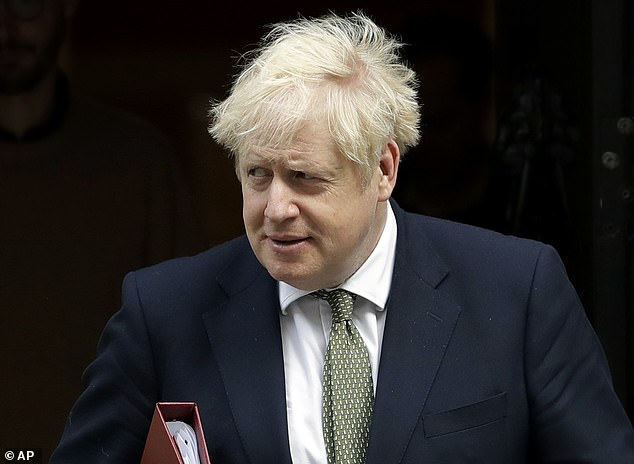 Boris Johnson, pictured walking from 10 Downing Street to a meeting, was ‘not criticised in the way David Cameron and Theresa May were, but loathed’, according to the head of JL Partners

Referring to the Prime Minister, James Johnson, who runs the insight company, told Politico: ‘In focus groups he is not just criticised in the way David Cameron and Theresa May were, but loathed.’

The former strategy adviser to Theresa May added: ‘It is hard not to look at these figures and assume the Union is doomed.

‘It is certainly the gravest situation the Unionist cause has found itself in in recent history.’

The findings revealed that Chancellor Rishi Sunak and former Scottish Tory leader Ruth Davidson were viewed most favourably by Scots out of the Conservative politicians.

Scottish First Minister Nicola Sturgeon reacted to the poll, tweeting: ‘The Indy support findings (56%) in this poll will grab the headlines, but it is a treasure trove of info on the attitudes that underpin that support – what people think of @scotgov/@UKGovScotland, different parties and a variety of issues. 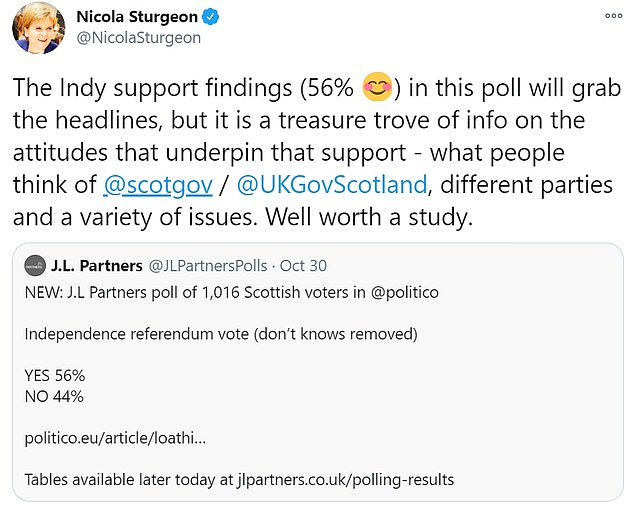 Scottish First Minister Nicola Sturgeon tweeted in reaction to the poll, above, saying it is a ‘treasure trove of info on the attitudes that underpin that support’ 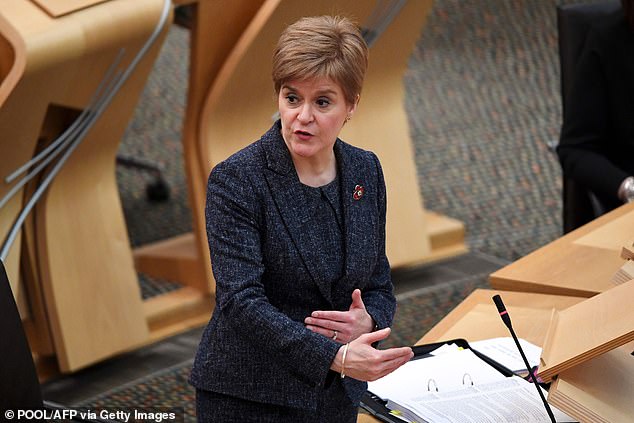 Ms Sturgeon, pictured above during the First Minister’s Questions session on Thursday, has confirmed a pledge to hold a second independence vote will be in her manifesto next May

‘Well worth a study.’

It follows another survey, from Panelbase, showing in August that backing for a breakaway has hit 55-45 in favour.

Pro-independence organisation Business for Scotland commissioned the poll, for which chief executive Gordon MacIntyre-Kemp hailed the results as a ‘huge landmark’ showing the ‘writing is very definitely on the wall for the union’.

Overall, 51 per cent of those questioned said they support independence, 42 per cent said they would vote to stay in the UK and seven per cent of voters were undecided.

When undecided voters were excluded, 55 per cent favoured Scotland leaving the UK, with 45 per cent preferring to stay in the union.

Ms Sturgeon has confirmed a pledge to hold a second independence vote will be in her party’s manifesto for next May’s Holyrood elections, which her party is widely expected to win comfortably.