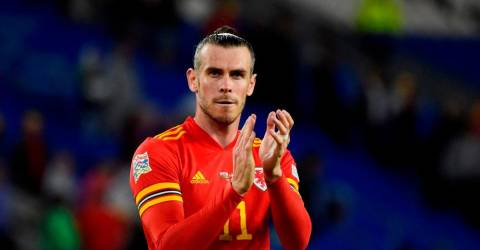 The US face Wales on November 21 in their opening Group B game in Doha, with former Real Madrid star Bale looming large in Berhalter’s thoughts.

Speaking after revealing his World Cup squad at a ceremony in New York on Wednesday, Berhalter said Bale’s knack of rising to the big occasion was cause for concern.

“One of the things that’s scary about Gareth Bale is that he can do things like that,“ Berhalter said of Bale’s game-saving MLS Cup goal, noting that the Welshman had outjumped Philadelphia’s 6ft 6in defender Jack Elliott to score.

“He dunked on him. He has that explosiveness, that free-kick and he can serve a ball,“ Berhalter said.

“You have to be aware of him at any moment and if he doesn’t start the game, he comes on and he’ll worry you even more.

“Because you don’t have the chance to tire him out – he comes in fresh. He’s a dangerous player.”

Several selections in Berhalter’s World Cup squad have been influenced by the fact that the USA face both Wales and England in Group B along with Iran.

Berhalter said England-based players such as Norwich’s Josh Sargent and Fulham’s Tim Ream were chosen due to their familiarity with the physicality of British football.

Sargent, who has scored eight goals in 18 games for Norwich in the English Championship this season, was included among a contingent of forwards which had no place for the 19-year-old striker Ricardo Pepi.

Pepi, who plays in Holland for FC Groningen, impressed during qualifiers with three goals in wins over Honduras and Jamaica, and Berhalter admitted leaving out the teenager had been a hard call.

“In the case of Ricardo that was a really difficult conversation that I had to have with him,“ Berhalter said.

“It’s always difficult when a guy helps you get to the World Cup, he scores three goals in World Cup qualifying, and isn’t going to be part of the program.”

In the end however, the 22-year-old Sargent’s experience of English football tipped the balance in his favor.

“Josh is competing in the Championship, he played in the Premier League last year,“ Berhalter said. “We’re playing Wales and England and both teams are stocked with players from those leagues.

“We were judging Ricardo against Josh, and we felt it was valuable that Josh was playing in the competition where two of our three group opponents are coming from. We felt that brings value, the physicality.

“The Dutch league is a great league but it doesn’t have the same physicality as the Championship.”

The biggest shock in Berhalter’s squad concerned the omission of goalkeeper Zack Steffen.

The 27-year-old has long been regarded as Berhalter’s first choice goalkeeper, but was left out in favor of Arsenal reserve goalkeeper Matt Turner, Luton Town’s Ethan Horvath and New York City’s Sean Johnson.

Berhalter would not be drawn on why Steffen had been deemed surplus to requirements, instead focusing on the strengths of Horvath, Turner and Johnson.

“With the three goalkeepers we have on the roster we feel great,“ Berhalter said.

“We saw a lot of progress with Matt Turner in this last six months, we know Ethan Horvath has been competing at a good level with Luton in the Championship, and Sean Johnson has been a mainstay with this group since day one. So we’re comfortable with that.”

Berhalter said Turner was likely to be the USA’s starting goalkeeper in Qatar.

“We’re going to determine that when we get into camp, but I would say the lean is towards Matt being the number one,“ the US coach said.